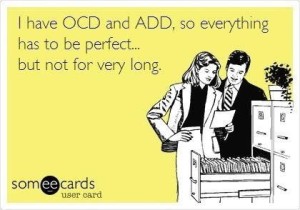 As most of you know, OCD issues abound in our Casa.  In fact, I might wager that between the two of us we’ve got enough “little” issues that they all might qualify as Subscriptions – lifetime version – to the Crazy People Quarterly.  And really, most of those issues are with things that other “normal” people don’t even notice, but that either of us will lose our shiz over.  Things like other people using my coverlet blanket (I have to wash it before I’ll ever let it touch me again).  Like unplanned things to do or changes to our schedule (we start at no, I work Bob to a yes).  Like oversized everyday objects like those great big sunglasses and pencils in every souvenir shop everywhere (triggers feelings of being overwhelmed or out of control in me, can’t even look at them let alone touch them).  Mixed foods, eating meals out of order, brushing your teeth after a shower rather than before… yeah, all of these, triggers for either one or both of us.

And you know you’re laughing… hell, so am I!  But that’s life around here.  We work around it, deal with it, accommodate it, and we live as normally as crazy people can, because life is like that.  You just deal.

One of my more infamous quirks though (and the one that probably causes me the most grief) is my tendency to make very elaborate and detailed plans for events and celebrations and then have no coping skills that allow me to handle it when something inevitably goes wrong and my plans don’t work out the way I planned.  This, of course, seems to happen with frequency, probably due to my overachiever nature colliding with life’s unpredictability, but when this happens?  Yeah, I’m not a happy camper.  I get stressed, irrationally angry, and then I get sad – in other words I go through the stages of mourning over the loss of my plans just like I do the death of a real person. Regrouping and changing plans?  Well, that takes a while.  First I have to do the steps of grief, every time this happens.  Yes, really.  All of them.

And despite knowing this and understanding it so well, yeah, it happened with Valentine’s Day this year.  And I’m still verklempt over it.  And shaking my head at the ridiculousness of feeling these feelings and being upset still.  Ridiculous.  See?  That’s the thing with OCD stuff.  You know it’s crazy, you know it’s ridiculous, but you can’t just stop it from bothering you.  Like the spelling of OCD.  Who did that anyway?  It should be alphabetized dammit!  Bugs the crap out of me every time I write it.  Oh, wait, here I go again… and we’re off on a tangent.  Another problem I have – ADD – and oh hey!  Look at that shiny squirrel!

And we’re back, to Valentine’s Day, and my plans, that were ruined by Orlando traffic, and the disagreeableness that ensued.  Because you can bet your ass that it ensued.  First, you have to know that I hate my 100 mile plus commute every day.  Yes, I love my job, I really really do.  But I purely hate that damned drive.  In fact every day I hate it just a little bit more.  It’s become a palpable thing, that hatred.  It’s my commute partner, sitting in the other seat, that I grumble to all the way to Winter Park and back home again.  Every. Day.  And the main reason for my ire?  The unpredictability of the damned thing.  I just never know what it’s going to be like.  I can’t plan for anything at home in the evenings because I don’t know what traffic hand I’ll be dealt any particular day.  And there’s a lot that can go wrong in the 60 miles I drive every afternoon.  Some days I’m lucky and it’s only a bit over an hour… other days (Like, oh, yesterday? Yeah I’m looking at you!) it’s over 2 hours and that’s with leaving work at 4:45 instead of 5:45.

And, of course, this is on the day when I’ve got plans, elaborate plans, planned out to the nth degree, of a fabulous menu for a delicious meal, that I had painstakingly built, taking care to mix and match tastes and textures for the perfect over-the-top comfort food meal I could make.  Yeah… er, that didn’t happen.

So, um, yeah… angry doesn’t really do those feelings justice.  When I had to go to Publix and buy a steak.  For a steak dinner that could be on the table by 8pm.  So we wouldn’t be up until 11pm eating dinner.  Because of traffic.  Feckin’ traffic.  Because of my commute.  Which ran over my carefully laid out plans.  Like traffic tends to do.  And yes, before you ask, the substitute meal was delicious.  But because I spent so much time planning the other meal in my head I just know that it wasn’t as good as the original meal I expected to serve.  And remember, I cook to relieve stress after a hard day at work.

The evening, of course, was good despite all this drama.  We enjoyed the substitute menu, and afterward we watched two new episodes of “House of Cards”.  In other words, Valentine’s Day for old married couples who’ve been doing this long enough to know that being all crazy in love isn’t limited to one day a year.  But still… the missing dinner… I’m still disappointed we didn’t get that.  I’ll do it Sunday because I have plenty of time then… but it just isn’t the same.  So damn you Orlando traffic.  And damn you OCD for being so crazymaking.

Now if you’ll excuse me, I’ve got a blanket or two to wash.  I know somebody wrapped up in them.  I just know it.  And since it’s coldish these days I need lots of blankets to wrap up in.  Gotta have options… even if I don’t plan for it.  That’s my evil plan, right?